July 19, 2017 - When Edge was two years old, she and her family were visiting her uncle's place at Lake Joseph in Ontario, Canada. Edge was observing her cousins playing a classic game of chess. Afterwards, she proceeded to play with the chess pieces setting them up by color in opposite corners of the chess board. Kind of random, but there was something special about it.

Her father Marc saw this setup and immediately thought that this is genius. It clearly was a new way of enjoying the game of chess. The devil was as usual in the details: Where exactly to place the pieces initially, what rules where same or different to classic chess, and of course would it be fun to play?

They began by turning the empty chess board by 45 degrees. Square a1 was right in front of them and h8 furthest away. As Edge had done as well, they started by placing the kings in opposing corners at a1 and h8. Then queen to rook were setup along the right edge and bishop to rook along the left edge which partly explains the name of our chess variant. Then we put the pawns in front to wall in the other pieces as is common in chess.

After a little while we notice the mistake and mirrored the setup to align with the proper order of pieces in classic chess. And, viola, Edgy Chess was invented by Edge and Marc Bernard!

The order of pieces is the same as classic chess, just shifted to the left until the king is in the corner. This makes it very easy to remember. Only a little fine-tuning of the Rules of Chess was necessary. Pawns would now move diagonally and capture to either side of their path. We got rid of moving two step and en passant, which is quite complicated anyway. But figured that castling would still be possible. Pawns would promote on the fields where the opponents initial non-pawn pieces are located. Off the family went and played the first ever game of Edgy Chess!

Name of the Game

The initial name of the game was "Edge Chess". However, research revealed that someone else had claimed this name for another - completely unrelated - chess variant already (see "Research" below). "Corner Chess" was taken already and didn't have the clever association to the inventor's name either.

Therefore the name Edgy Chess was born. It keeps still pays tribute to the inventor (good frieds might call Edge by "Edgy"). Also, after playing Edgy Chess for a few times, you will notice that the name makes even more sense when you look at the actual definition of the word edgy: "having a bold, provocative, or unconventional quality". It fits perfectly to how the game plays.

Of course it's best to play Edgy Chess with a real chess board and pieces. However, the question quickly became if and how one could play Edgy Chess online - against a computer or another human player. When searching for apps for chess variants, we came across "Jocly" which is a fantastic gaming engine. Not only does it let you play classic chess but also many different variants (as well as other games). It's awesome since it can render the game in a very realistic 3D view. And if you own a pair of 3D glasses, you can turn on an Anaglyph 3D View, which is just extra cool.

As it turned out, Jocly was not only an app for your mobile phone and a website to play, but it's also available publicly as JavaScript libraries to run on your own server (see "Credits" below). It also provided instructions on how to design your own chess variant and integrate it with Jocly. After some trial and error, Marc was able to code the first version of Edgy Chess to run with Jocly.

Some time in 2018, the Jocly.com server was sadly taken down and all game variants relying on it stopped working. It wasn't until April 2020 that Marc found the time to fork the Jocly repository and build the current version of Edgy Chess and host it on www.EdgyChess.com.

If you own the classic Zillions of Games, we compiled a Zillion Rules File for Edgy Chess, which you can download here. 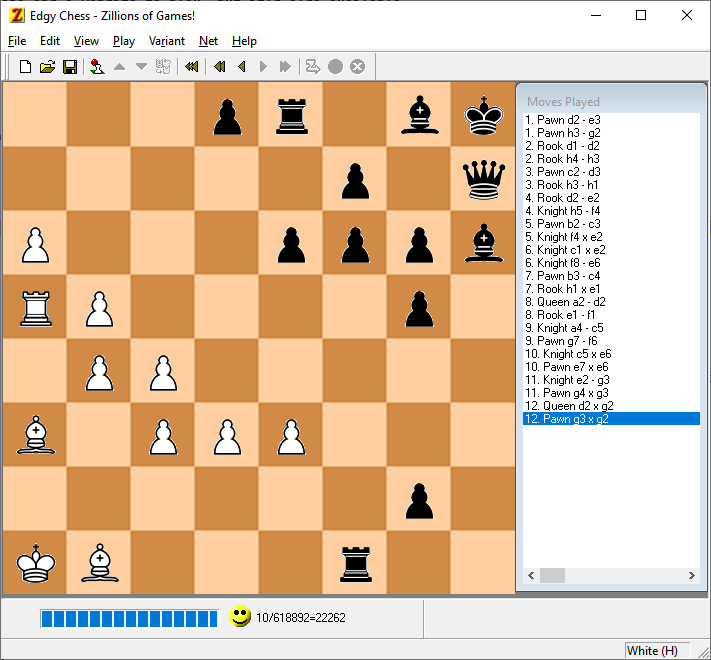 Here's our own quick take on Edgy Chess. Please let us know your own thoughts at .

Except for pawns, all pieces move the same way as in classic chess.

So far there's little practical experience with Edgy Chess. Most of it actually stems from playing online against a computer on www.EdgyChess.com.

Here's a summary of the comparison between classic chess and Edgy Chess: 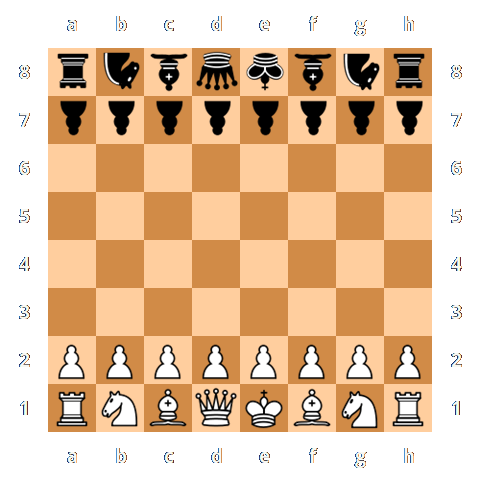 There are many, many chess variants but could it be that no one had thought about a setup like Edge and Marc had invented? Initial online research turned up some existing variants like "Edge Chess", "Corner Chess", and "Corner-square Chess" variants that have no resemblance to Edgy Chess.

The best source for offline research of chess variants is David Pritchard's The Encyclopedia of Chess Variants. This incredible book did reveal "Legan Chess" as one variant where pieces are initially positioned at the corner (we could't find any other).

However, there are significant differences between Edgy Chess and Legan Chess: