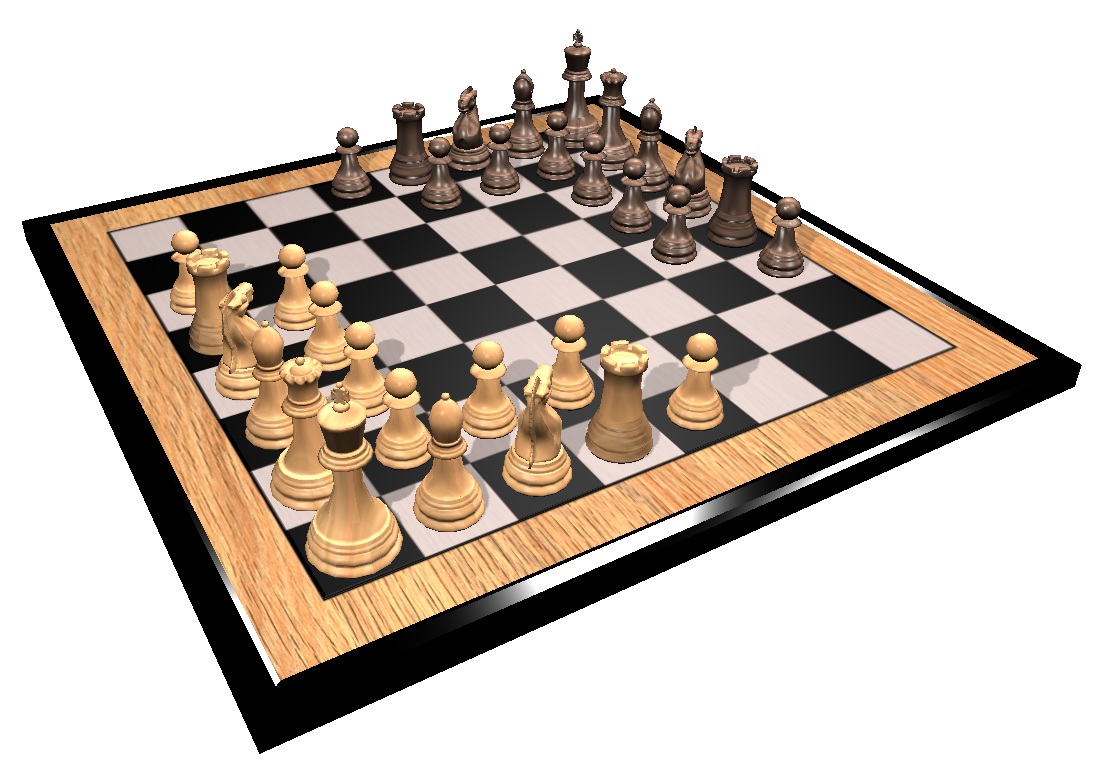 Turn your board 45 degrees and setup the pieces starting with your king in your corner as shown below: 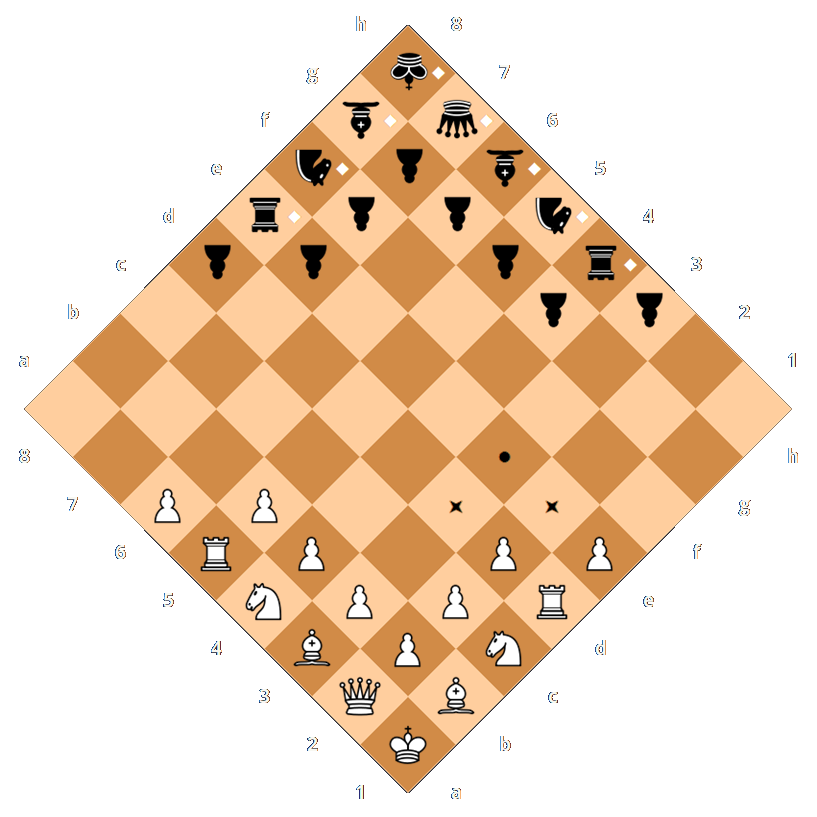 Pawns move diagonally forward one step at a time (

) and capture to the side of their path (

).
Pawns are promoted on the opponents non-pawn fields (

Castling is allowed but there is no en passant.

Edgy Chess is a variant of Regular Orthodox Classic Western Chess. It uses the same geometry, same type of pieces, same number of pieces, castling, an in general the same rules as classic chess. It differs from classic chess in the initial setup of the board as well as the movement and promotion of Pawns.

This all makes a lot of sense when you see the initial board setup with the corner pointing towards you. The beauty of this variant is that it can be played with any classic chess board and pieces available in the world and is easy to learn for anyone who knows how to play chess. It's actually easier to learn than classic chess since there's no en passant rule. The setup also leads to more aggressive play since opponent pieces are on average a bit closer together.

It looks like chess but it is a new game. Same, same, but different.

Note: Differences to classic chess are shown in italic.

Edgy Chess is played on a chessboard, a square board divided into 64 squares (eight-by-eight) of alternating color, which is like the board used in draughts (checkers). No matter what the actual colors of the board, the lighter-colored squares are called "light" or "white", and the darker-colored squares are called "dark" or "black". Sixteen "white" and sixteen "black" pieces are placed on the board at the beginning of the game. The board is placed so that a dark corner square is in front of each player.

Play of the Game

The player controlling the white army is named "White"; the player controlling the black pieces is named "Black". White moves first, then players alternate moves. Making a move is required; it is not legal to skip a move, even when having to move is detrimental. Play continues until a king is checkmated, a player resigns, or a draw is declared, as explained below. In addition, if the game is being played under a time control, then players who exceed their time limit lose the game.

Each chess piece has its own method of movement. Moves are made to vacant squares except when capturing an opponent's piece.

Apart from any movement of the knight and the occasional castling maneuver, pieces cannot jump over each other. When a piece is captured (or taken), the attacking piece replaces the enemy piece on its square (en passant does not exist in Edgy Chess). The captured piece is thus removed from the game and may not be returned to play for the remainder of the game. The king can be put in check but cannot be captured (see below).

The king can move exactly one square horizontally, vertically, or diagonally. Only once per player, per game, is a king allowed to make a special move known as castling (see below). 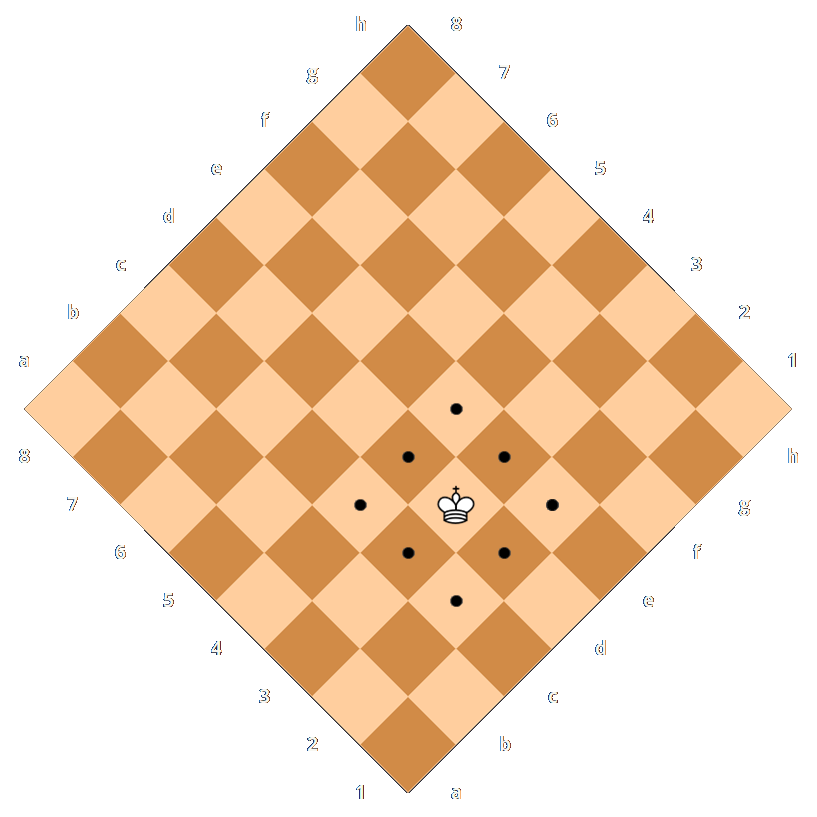 The rook moves any number of vacant squares vertically or horizontally. It also is moved while castling. 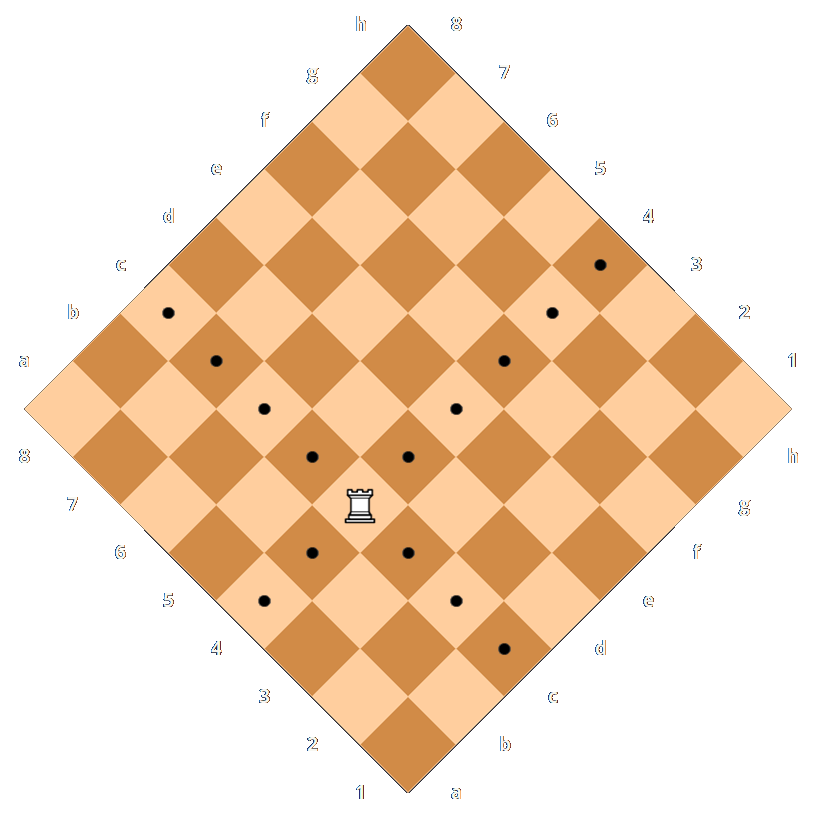 The bishop moves any number of vacant squares in any diagonal direction. 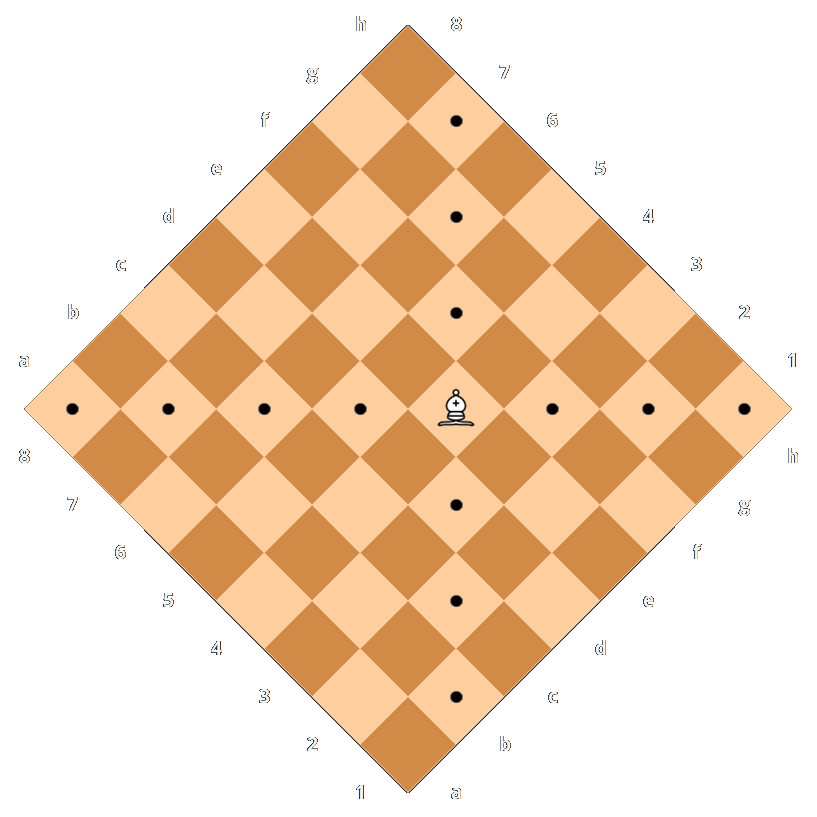 The queen can move any number of vacant squares diagonally, horizontally, or vertically. 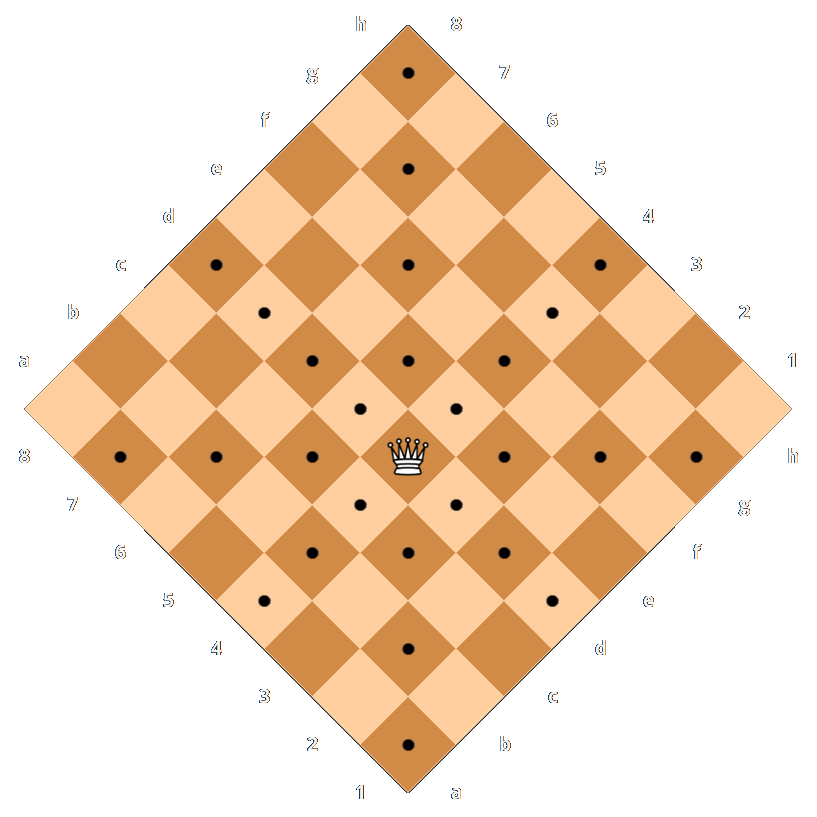 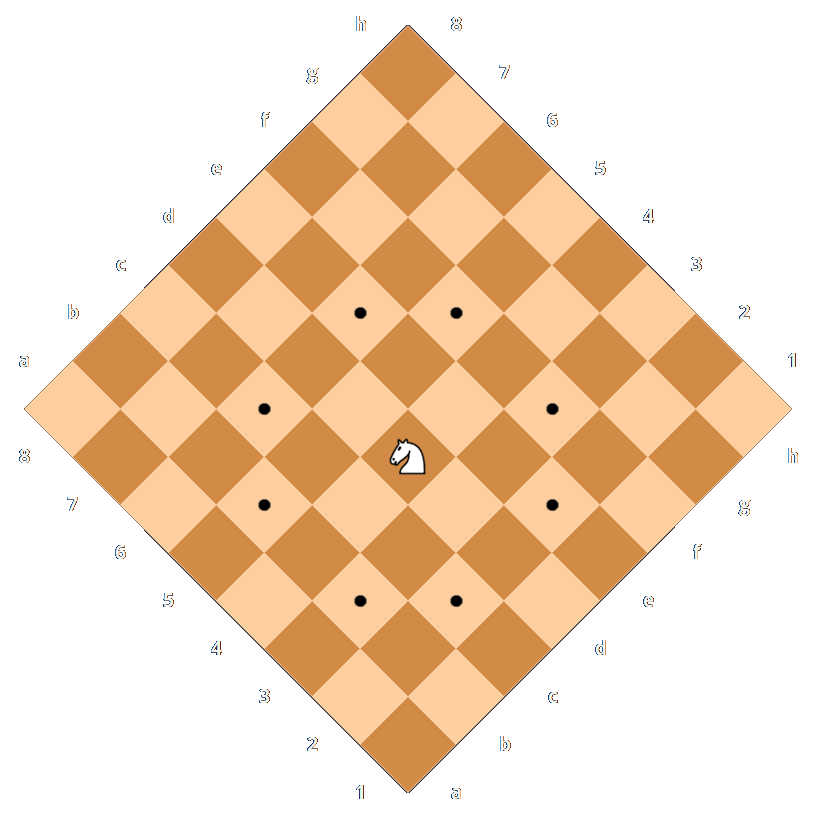 Pawns have the most complex rules of movement: 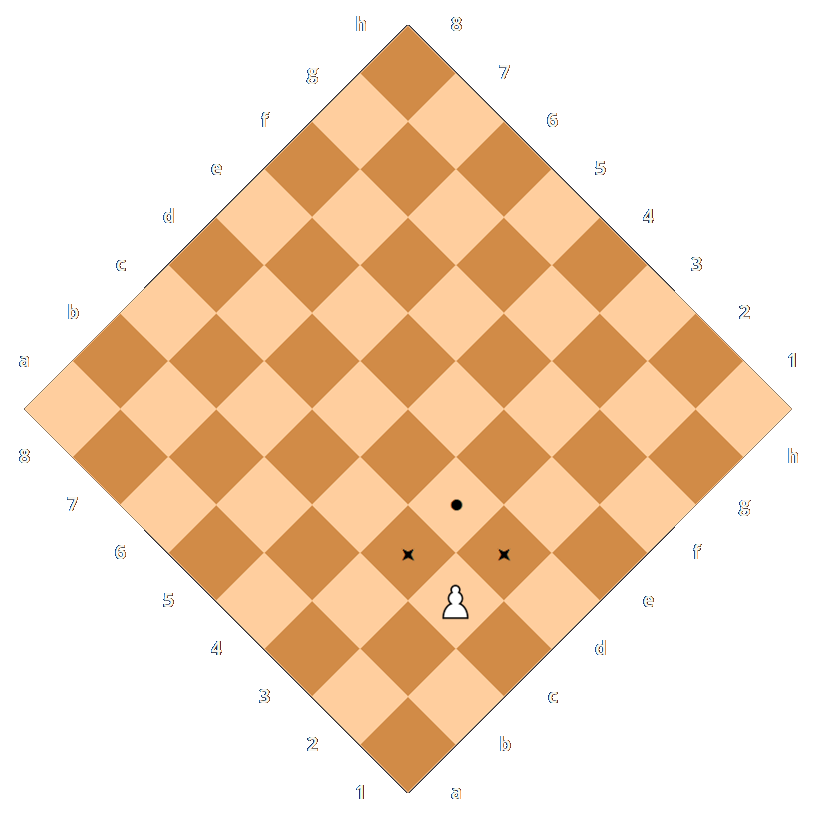 Castling consists of moving the king two squares towards a rook, then placing the rook on the other side of the king, adjacent to it. Castling is only permissible if all of the following conditions hold: 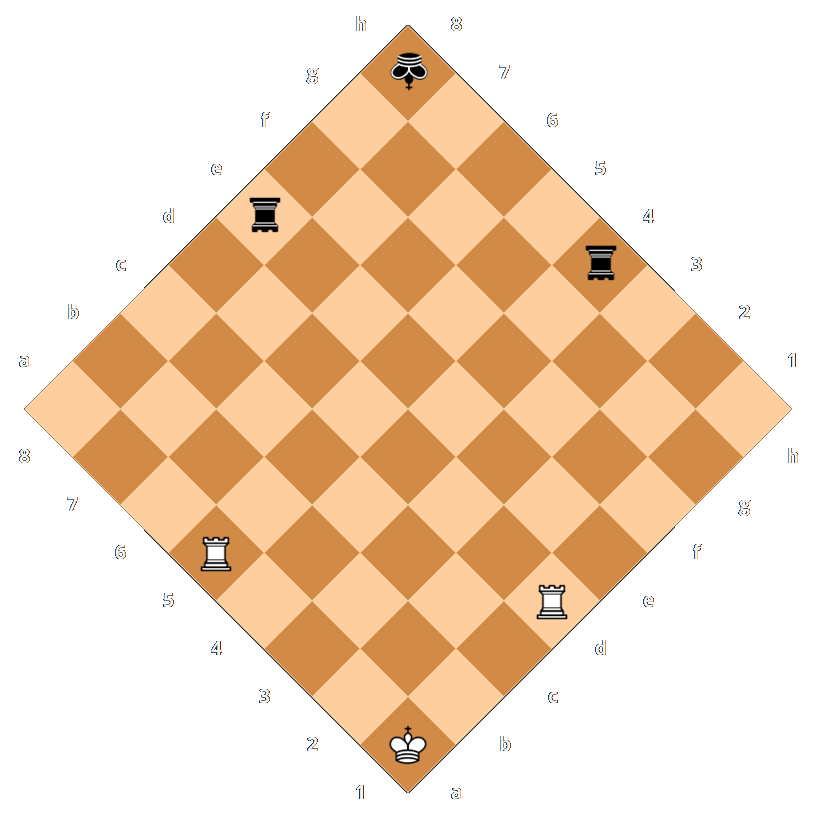 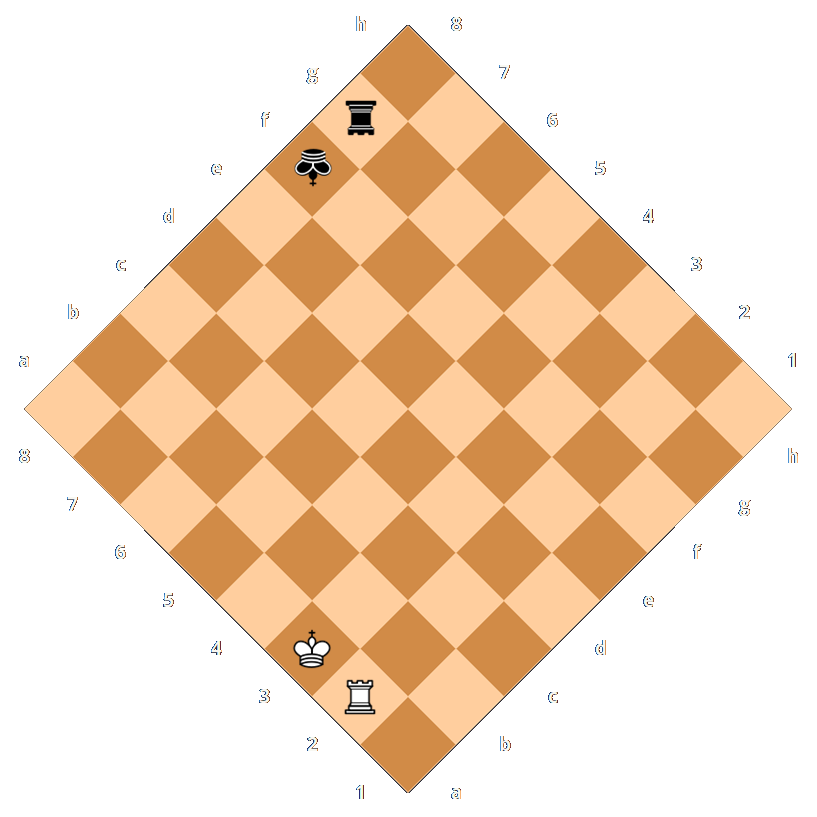 En passant is not available in Edgy Chess.

If a pawn advances to a promotion field (see diagram), it is then promoted (converted) to a queen, rook, bishop, or knight of the same color, the choice being at the discretion of its player (a queen is usually chosen). The choice is not limited to previously captured pieces. Hence it is theoretically possible for a player to have up to nine queens or up to ten rooks, bishops, or knights if all their pawns are promoted. If the desired piece is not available, the player should call the arbiter to provide the piece. 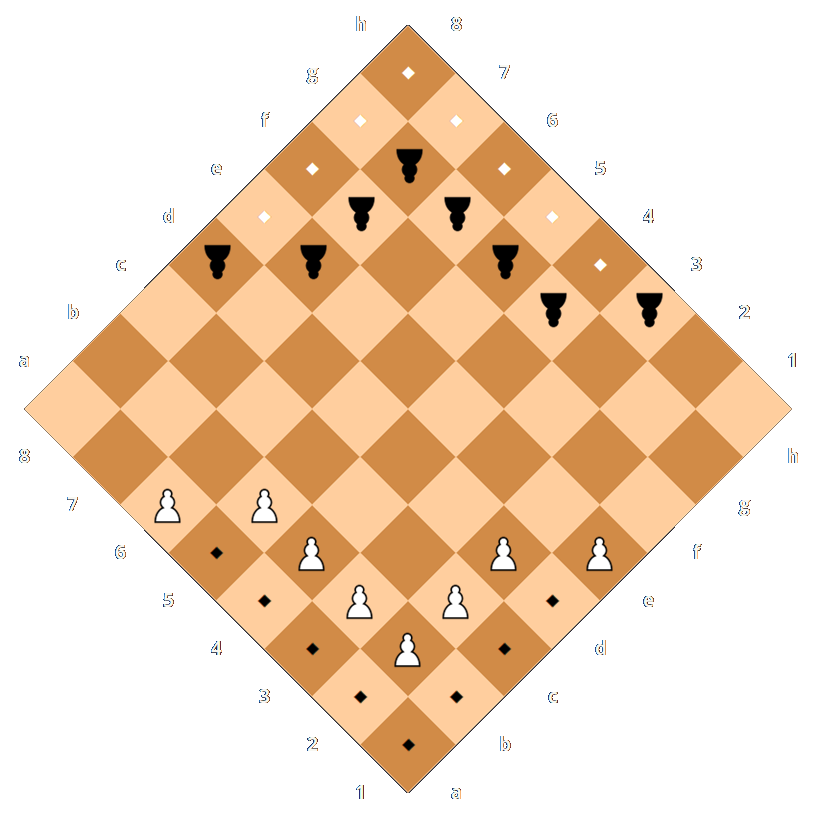 White pawns promote on squares e8-h8-h4 (marked with white diamonds); black pawns on a5-a1-d1 (marked with black diamonds). Note that the pawns that start on a6 and h3 cannot promote without moving toward the center of the board via capturing.

A king is in check when it is under attack by one or more enemy pieces. A piece unable to move because it would place its own king in check (it is pinned against its own king) may still deliver check to the opposing player. 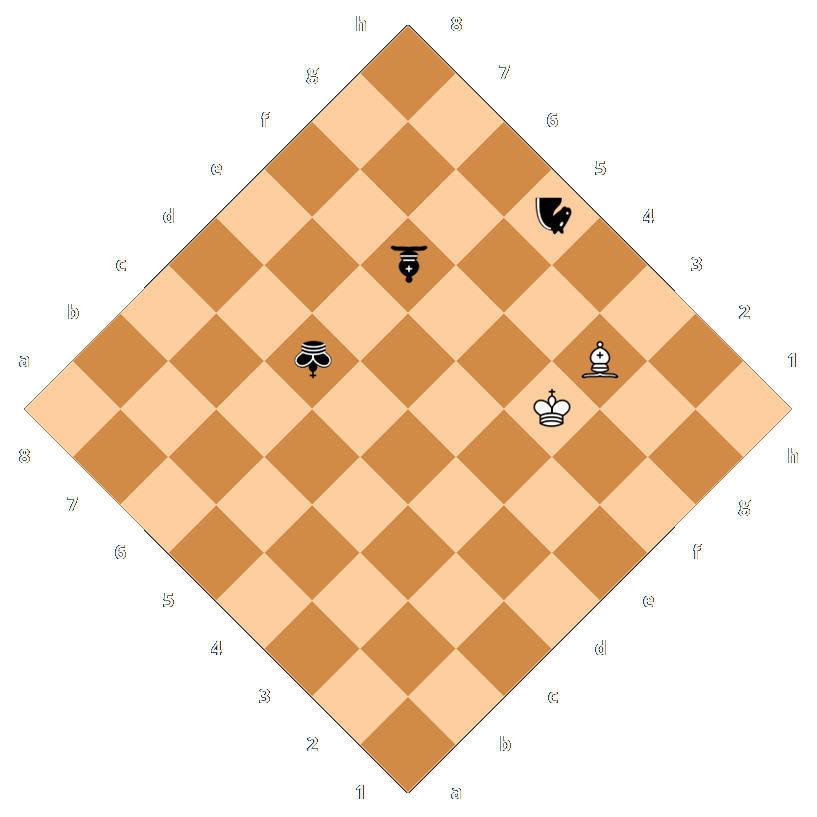 A player may not make any move which places or leaves his king in check. The possible ways to get out of check are:

End of the Game

If a player's king is placed in check and there is no legal move that player can make to escape check, then the king is said to be checkmated, the game ends, and that player loses. Unlike other pieces, the king is never actually captured or removed from the board because checkmate ends the game. 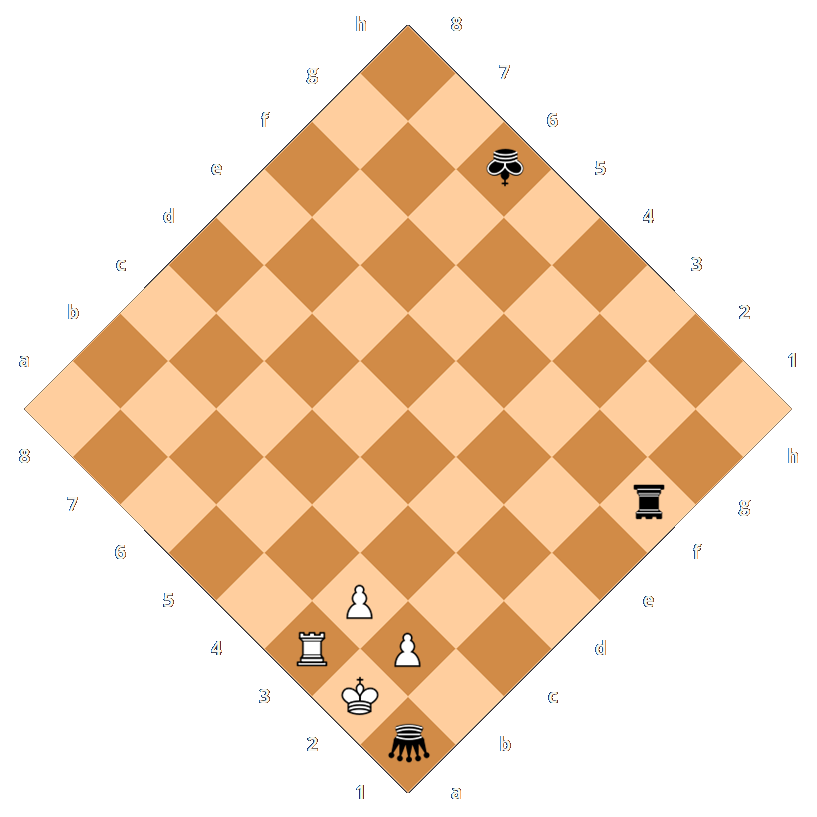 The diagram shows a typical checkmate position. The white king is threatened by the black queen; every square to which the king could move is also threatened; it cannot capture the queen, because it would then be threatened by the rook.

The game ends in a draw if any of these conditions occur: 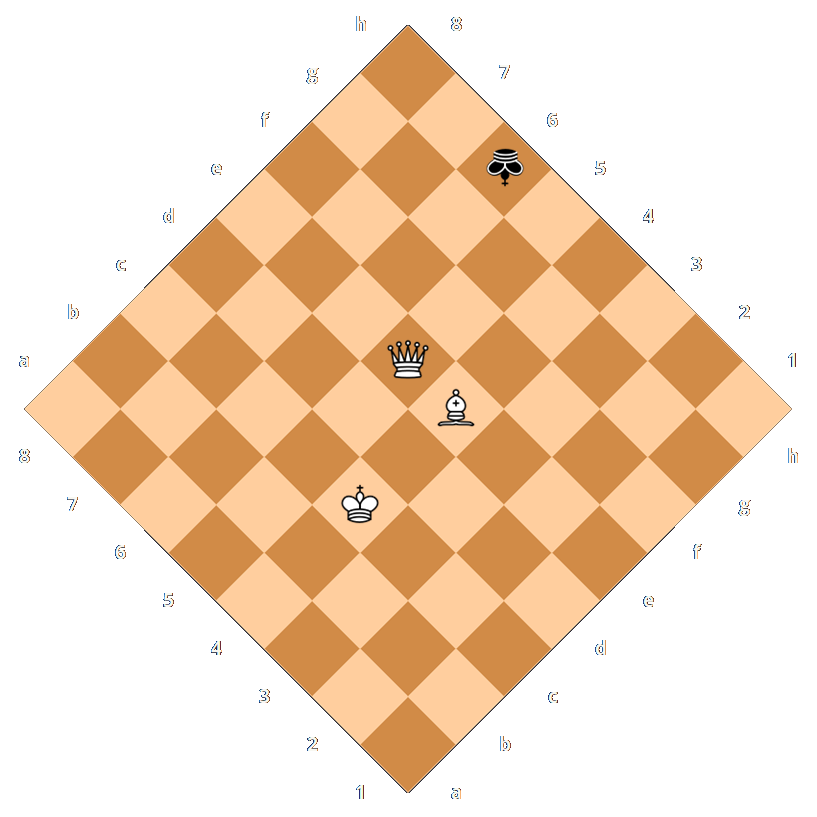 If the claim is proven true, the game is drawn.

At one time, if a player was able to check the opposing king continually (perpetual check) and the player indicated their intention to do so, the game was drawn. This rule is no longer in effect; however, players will usually agree to a draw in such a situation, since either the rule on threefold repetition or the fifty-move rule will eventually be applicable.

Since Edgy Chess is using the same board, pieces, and movements as classic chess, all types of Chess Notation may be used. 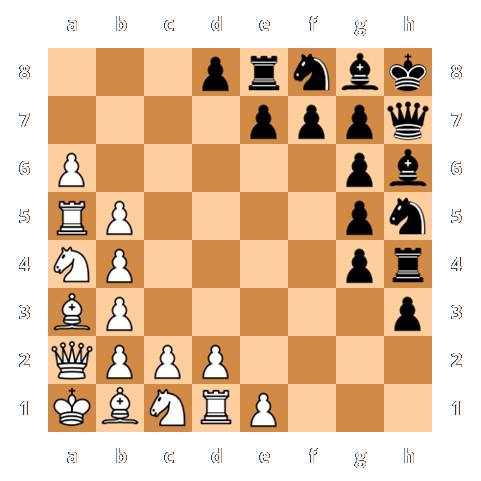 On this website, we use the player view for showing Edgy Chess boards and pieces. However, as an alternative graphical presentation of an Edgy Chess game, one can certainly use the traditional graphics for chess. 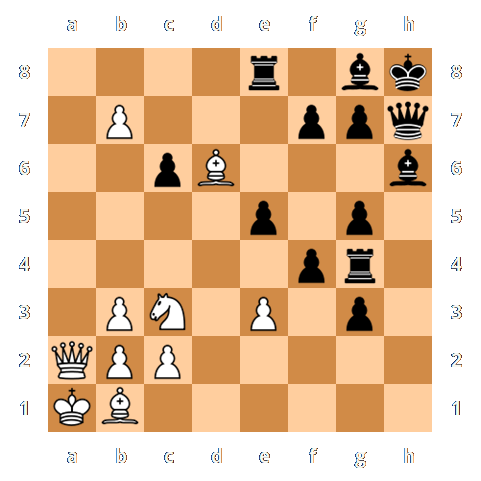 Some of the text above was extracted from Wikipedia, under Creative Commons Attribution-ShareAlike 3.0 License and adapted to the rules of Edgy Chess. For more details and references, please access the original articles about the Rules of Chess and Legan Chess.